As many as one out of every ten women of reproductive age experiences the pain and debilitation of endometriosis.

The talented OB-GYN team at Dekalb Women's Specialists can help you find a treatment path and assist in managing your symptoms. If you’re suffering from unexplained pelvic pain and/or menstrual irregularities, see an OB-GYN professional right away. You may be surprised at how being properly diagnosed and treated for endometriosis can dramatically improve your quality of life. 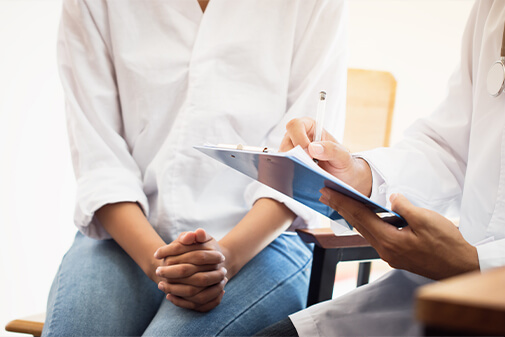 Endometriosis is a gynecological condition in which the lining of the uterus, called the endometrium, starts to grow outside of the uterus. This endometrial tissue might appear on the bowels or bladder, or on other reproductive organs.

Despite being located outside the uterus, the errant endometrial tissue still goes through the same cycle as the tissue within your uterus – it sloughs off and results in menstruation each month. However, unlike properly situated uterine tissue, this blood doesn’t have a clear exit out of your body. As a result, you may experience inflammation and develop scar tissue around your uterus, intestines, or bladder.

Signs and symptoms that indicate you may have endometriosis include:

Endometriosis can make it difficult for you to get pregnant.

When you have symptoms that suggest endometriosis, your doctor may conduct a pelvic exam to feel for any unusual tissue. An ultrasound or MRI may also be ordered to rule out other conditions, such as ovarian cysts.

The only way to confirm a diagnosis of endometriosis is minimally invasive surgery to find the misplaced uterine tissue. If endometriosis is found, your OB-GYN specialist may also remove it using the precision of robotic-assisted surgery. Surgical removal of tissue can restore infertility issues related to endometriosis and relieve severe symptoms. However, it doesn’t prevent the tissue from growing back over time.

Although endometriosis cannot be cured, your symptoms can be controlled and managed. For example, if you’re not trying to get pregnant, you may opt for hormonal birth control, which can significantly reduce your pain and bleeding symptoms. If you’re actively trying to become pregnant, there are other safe and effective hormonal or pain medications that can ease your symptoms.

If you have symptoms that suggest endometriosis, call Dekalb Women’s Specialists at (404) 508-2000 for a thorough evaluation. You can also request an appointment with us now.

We have three convenient locations near Atlanta, Georgia, from which to serve all your OB-GYN and women’s healthcare needs: in Decatur, Stonecrest, and Stone Mountain.