Albert Scott Jr., MD, is a compassionate OB-GYN and the founder of Dekalb Women's Specialists in Decatur, Stonecrest, and Stone Mountain, Georgia.

Dr. Scott was born in Mansfield, Ohio. He received his bachelor of science in honors mathematics from Ohio State University and his medical degree from Case Western Reserve University in Cleveland, Ohio. Dr. Scott then completed his residency training at Henry Ford Medical Center in Detroit, Michigan. He went on to complete his da Vinci robotic training and received his certification in 2014.

He is a board-certified OB-GYN physician and fellow of the American College of Obstetricians and Gynecologists (FACOG). In August of 2019, Dr. Scott was inaugurated as the 69th president of the Georgia Obstetrical and Gynecological Society (GOGS) after serving on its board for more than 12 years. He was also appointed by the governor to sit on the Coronavirus Task Force during the most critical medical crisis in recent times.

Dr. Scott has received many prestigious awards, namely “Top Doc” by Atlanta Magazine, and a nomination for “Outstanding Physician of the Year” by the Atlanta Business Chronicle. His leadership roles in the community have included past president of GOGS, chief of the Department of Obstetrics and Gynecology at DeKalb Medical Center (now Emory Decatur Hospital), and a member of the DeKalb County Hospital Authority Board for nearly 20 years. While serving as medical information officer, Dr. Scott helped Dekalb Medical Center convert to electronic medical records.

Dr. Scott was the first African American physician to become chief of staff at Dekalb Medical Center in its 50-year history and is currently president-elect of the Dekalb Medical Society. He is a graduate of the Georgia Physician Leadership Program, class IX.

When he’s not working, Dr. Scott enjoys golf, running, and intermediate ballroom dancing. He completed the Boston (2010) and New York (2013) marathons. He is also conversant in Spanish. His community roles include being a member of DeKalb County 100 Black Men, and the Alpha Phi Alpha Fraternity. He is the husband of Sabrina R. Scott, Esq., a magistrate judge; proud father of Trey, a Georgia district attorney, and Courtney, a PhD candidate at the University of Georgia.

Dr. Scott is conversant/fluent In Spanish. 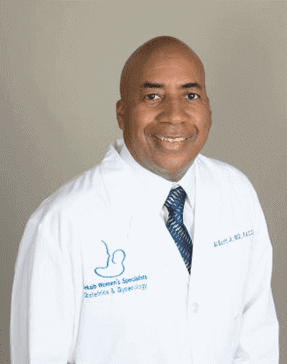